In fact, they were welcomed with open arms just this weekend.  You didn’t know?  Where have you been?

Crowds pushed through and sailed through passport control, welcomed with gusto. They crossed a busy border strait, with two different oceans on either side, and didn’t even have to get their toes wet.  Lost children were safely plucked from the sea of people at various times during the day, and handed safely back to their designer-clad parents.

The crowd carried few belongings, mostly fresh drinking water, and a few snacks for the long queue ahead, as well as their documentation. They were identifiable once inside the fenced secure compound by their wristbands and entry papers.

But this was no war, no running for your life, no sweat.  The migrants were of many nationalities, three different passport holders in our little group of five.

It was Gibraltar Music Festival – where the migrants carried money – lots of it – and we all went safely home at the end of the two day festival.

A cashless event – the wristbands, or smartbands,  were ‘loaded’ up so no money was exchanged at the many food and drink outlets. 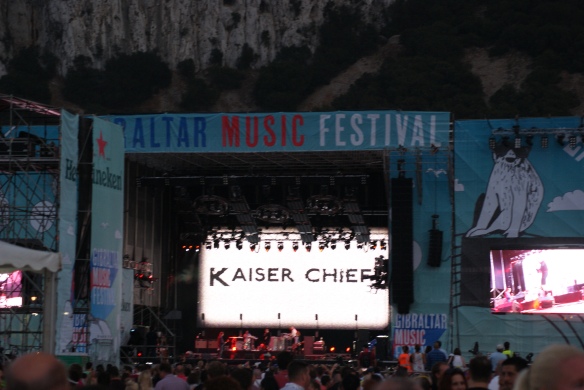 Driving home – I idly wondered allowed whether any of us had money (non-refundable) left over on our smartbands.  Oddly, we all had a quid or two (maybe not so strange, as the drinks were not a rounded up price)

Hmm, so if we all had an average of £2 left, and there were 15,000 revellers….well,you do the maths. Perhaps a timely donation to the real refugee crisis?  No that would be smart marketing.